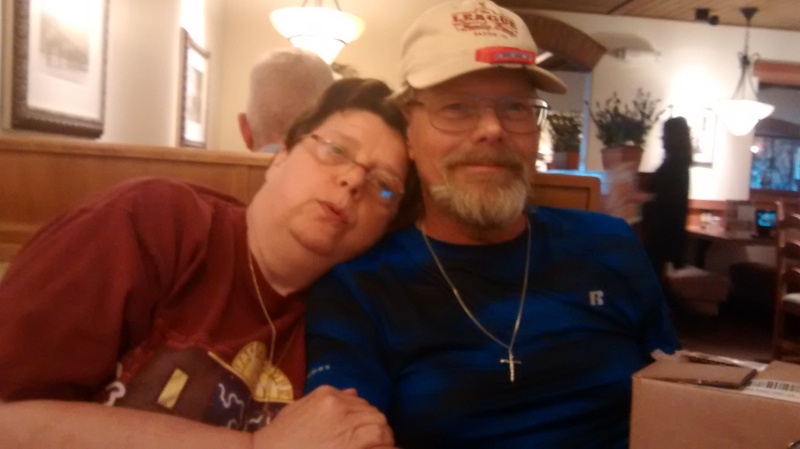 If anyone had noticed I hadn’t posted in awhile, it is because my husband passed away on 12/14/2017 which would have been my mom’s 85th birthday. As many people know he has been sick for many years and had many health issues and challenges.

He had surgery on his ear November 30th to remove a large cyst deep in the ear canal and try to repair some of the bones that had deteriorated. We were hoping that some of his hearing in that ear would be restored but more than that, we were attempting to get the infection out of his system before the cyst burst and spread the infection possibly into his brain.

He’d been nauseous a lot since the surgery and I had asked him several times if I needed to take him to the emergency room. But he would just try over the counter meds and say he’d wait until the next day. He called an ambulance on the morning of the 14th after I had gone to work. When they got him up to the emergency room, they started fluids to help his dehydration and gave him nausea medications in his IV. This pretty well went on all day long.

They had said they needed to get a urine sample to check his liver and kidney function but he had been unable to ‘go’ all day. Finally, he was able to pass a tiny bit for them to test. They said his labs looked ok and they were sending him home with some prescriptions for nausea medications. He tried to get them to let him stay but they said they had no reason to admit him based on his lab work. So a little after 5pm they sent us home.

I stopped at Walgreens to pick up his prescriptions and get him some apple juice.  We started home which is usually about a 20-minute drive but an accident on the interstate delayed us for about 20 additional minutes.

When we got home and he stepped into the front door he said he couldn’t breathe and collapsed. I ran for his oxygen, started chest compressions, and called 911. A police officer was there within minutes and took over with the chest compressions until the ambulance arrived. His defibrillator fired two times but it was unable to revive him.

They continued working on him in the ambulance and took him to the hospital. When I arrived they said that the EMTs were unable to revive him and that he was ‘gone’. The doctor that came in to speak to me said that he had reviewed my husband’s lab work and stood by their earlier decision to release him based on the information they had at the time. I suppose I was too much in shock to react properly to the fact that he didn’t have enough time to check on my husband personally all day but he had time to tell me that it was ok that they sent him home.

Since his defibrillator had fired twice and was unable to revive him, the same thing probably would have happened whether or not he was in the hospital and the results would likely have been the same either way, but I remember how my husband looked when he asked them to keep him overnight for observation and to finish getting him stabilized. And it is hard to think that within 2-3 hours of being released he passed away.

The 7th of January 2018 would have been our 16th wedding anniversary. And we will have a graveside service in a couple of months when his headstone is set in his family cemetery in a nearby town. I’ve had great friends, family, and coworkers who have been helping me try to piece my life back together.

This year has had record Arctic Cold Waves but at my house, it is cold regardless of the weather.

29 Dec This entry was published on December 29, 2017 at 9:41 pm and is filed under American, At home, Christmas, Family, Green Living, Health, Holidays, Lessons from the past., Living/Style, musings, Nostalgia, Nostalgia, Parents & Kids Reading, Personal, Simple living, The River, travel, Uncategorized, Winning, Writing. Bookmark the permalink. Follow any comments here with the RSS feed for this post.