Even the jar flies aren’t singing…

Summer is hanging on for dear life in the South. The crisp morning air and chilly evenings are sandwich layers for days still reaching the 80’s and 90’s. But it is inevitable that summer will lose it’s grip and fall will be upon us.

The trees have started to lose their leaves and the summer insects are slowing down. Some are dying because their cycle only required mating and death during the summer. So it goes for the jar fly. Well at least that is what my dad called them. When you see them, or see photos of them a fly doesn’t really come to mind. However, if you happen to catch them resting with their wings slightly apart, they do resemble a giant prehistoric fly.

An empty shell after the cicada has flown away.

With all of the incredible monsters that have been created for Hollywood, it is a wonder we were never attacked by giant cicadas that emerged after a chemical spill.  Or were we? They are certainly scary looking enough. 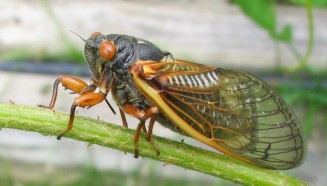 A cicada looking for a mate.

This year wasn’t a 13th year or 17th year, but there were enough cicadas this year to sing their song quite loudly while looking for a mate.

But their song is gone for this year. And without their summer singing it is only a matter of time before fall and winter are upon us. Even in the South…

Photos are from various free sites on the web.

30 Sep This entry was published on September 30, 2017 at 1:46 pm and is filed under American, Animals, At home, Family, Green Living, Humor, Lessons from the past., Living/Style, musings, Nature, Nostalgia, Parents & Kids Reading, Parks and Natural Areas, Personal, Pets, Simple living, travel, Uncategorized, Writing. Bookmark the permalink. Follow any comments here with the RSS feed for this post.

12 thoughts on “Even the jar flies aren’t singing…”